The facts and figures about waste 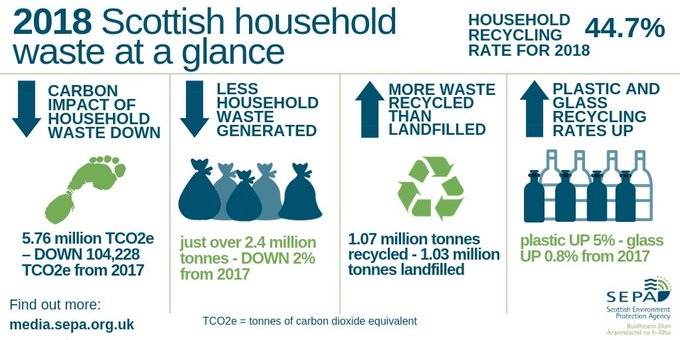 This infograph, produced by SEPA, provides a summary of how Scotland as a whole managed its waste in 2018.

if you see a plume from the stack, it’s water vapour, not smoke (and looks like steam)

In October 2017, Aberdeen City Council's new £27million materials recycling facility was officially opened which is capable of processing 20 tonnes of mixed recycling an hour, including glass, cardboard, paper, newspaper, plastics, and metals. Mixed recyclables collected from homes and businesses are sorted before being sold as high-quality materials for re-processing. This new scheme has seen a significant increase of recyclables collected from households. The Council also collects food and garden waste across the city. In 2017 the Council’s recycling rate was 43.9% and this has increased to 47.3% in 2018 and is expected to rise further in 2020.

Since 2005 Aberdeenshire Council has introduced and enhanced their kerbside recycling collection scheme. Weekly food waste collections were also introduced to all households in Aberdeenshire by March 2015. Residents in houses can recycle using 240L blue lidded wheeled bins collected on a fortnightly basis. The blue lidded bin accepts all recyclable waste paper, cardboard, steel and aluminium cans, aerosols, aluminium foil (but not other metal foil) and trays, plastic drinks, detergent and cosmetic bottles, plastic pots, tubs and trays, tetrapaks. Their recycling rate in 2018 was 43.4%.

Moray Council offers a comprehensive 3 container kerbside recycling collection scheme targeting paper, card, metal cans, tins, foil, aerosols, plastic and glass along with a food and garden waste collection. In the latest statistics released by SEPA - the Scottish Environmental Protection Agency ­- Moray ranks fourth out of 32 local authorities, with their recycling performance rising from 55.1% in 2016 to 57.4% in 2018.